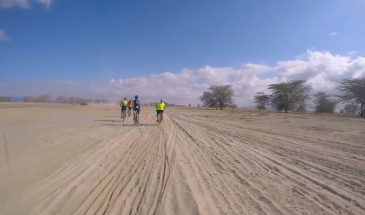 ABOUT THE TOUR Cycle around the base of Africa’s tallest free standing Kilimanjaro mountain and highest volcano in African continents. This is an ideal…

Cycle around the base of Africa's tallest free standing Kilimanjaro mountain and highest volcano in African continents. This is an ideal trip for mountain bikers looking for a challenge or any avid cyclists wishing to cycle on Mt. Kilimanjaro.

WHY YOU'LL LOVE IT

Primates can be seen while cycling through the forest zone and larger game animals can be seen on the heath and moorland zone. On a clear day, you will see breathtaking views of Kibo peak as you cycle towards the helipad.

Brief information about the area

But the most important thing in Tanzania is safari tours. We offer you 1-10 day safari tours (walking, cycling and car), as well as unique 6 days migration safari tours.Tanzania’s magnificent wildlife is one of its strongest attractions as tourists can embark on idyllic game drives seeing a variety of different wildlife. Undoubtedly, the country’s most popular national park is the Serengeti as it’s over 14 500 square feet of endless rolling plains offers guests a world of splendour and tranquillity.

Recently, cycling tours and cycling are in great demand.

According to the rules of the park, in order to SAFETY, we are ALWAYS accompanied by an armed ranger !!! The team is led by a local certified English / French / German speaking guide.