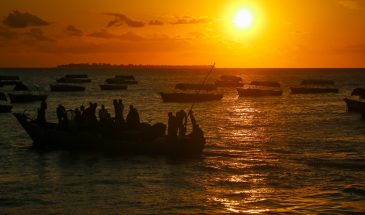 Pick up from Zanzibar airport or harbor to Stone town hotel. Overnight in Stone Town on Bed & Breakfast basis.

Depart for a guided town tour. This tour takes you through narrow streets of the Old stone town, where history appears to stand still. With visits to the House of Wonders, the Palace Museum (People’s Palace), Dr Livingstone’s House and the Arab Fort among-st others, it is a fascinating look at the essence of Zanzibar. You will see Zanzibar’s bustling market, winding alleyways, ornately carved and studded doors, two cathedrals and mosques! You will have free time in the afternoon for you to explore further on your own or to relax. In the evening, depart from the hotel for a sunset cruise along Stone Town waterfront. Stop at Forodhani gardens for a glance at the evening life. Dinner at a local restaurant.Overnight in Stone Town.

TOUR TO THE SPICE PLANTATIONS OF ZANZIBAR

Depart from the hotel and transfer to Kizimbani Village for a spice tour, where you will have the opportunity to see spices like cloves, Cinnamon, Black pepper, Nutmeg, turmeric root, actually growing in the plantations. Other tropical fruits such as jack fruit, custard, apple, Rambutan, Carambola can also be seen and tasted. Furthermore you will see plants like the Henna bush, Lipstick tree and Lemongrass. Finally you will visit the Kidichi Persian Baths that were built by the first Sultan of Zanzibar named Sultan Said Said bin Sultan in 1850 and Maruhubi Palace Ruins built by the third Sultan of Zanzibar named Sultan Said Baraghash Bin Said in 1880 which were built especially for housing 99 of his harem. Lunch is included. After lunch, you will be transferred to the beach hotel on the East coast. Accommodation on Half Board basis is included.

RELAX ON THE BEACH IN ZANZIBAR

Spend days at leisure on the beaches of the East Coast or at the resort’s swimming pool. Scuba diving or diving course for beginners are available (at an additional cost) at most of the beach resorts in Zanzibar. Accommodation on Half Basis is included.

After breakfast transfer to the airport for flight back home after your exciting African holiday.

Be the first to review “ZANZIBAR EXPEDITION 6 DAYS OPTION 1”